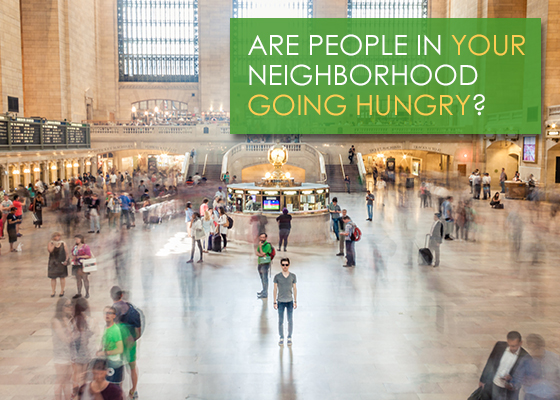 43 million Americans are going hungry. Can you tell who in your neighborhood is going without food? 1 in every 8 people you pass by on the street could be missing meals.

The latest statistics on hunger from Feeding America tell us:

Feeding America provides an interactive map of food insecurity in the United States. Check out your district to see how you compare to others. Is your neighborhood hungry? What can you to do change that? How can we make this better? 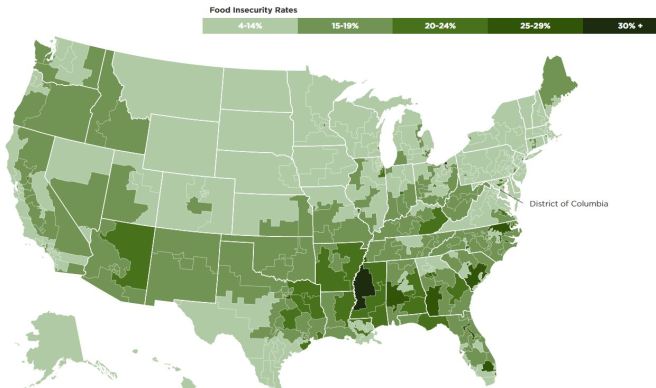 Easy Ways to Make a Difference for Hunger

Donate Food. Find a local food bank that’s collecting food. Check their website or call and ask what food items they need, but them and deliver them to the food bank. Make sure to check their hours for accepting donations.

Start a Food Drive. Move for Hunger has great information on how to set up a food drive in your area. Check out their tops, find a great location and get your community involved.

Fundraise. Create an online fundraiser and get others involved in raising money for charities solving hunger issues. You can set one up in minutes on JustGive and post your appeal on social media to get your friends and family involved. When someone asks what’s on your holiday gift list, tell them gifts of charity for the hungry would mean the most to you.

Volunteer. Find a local food banks, soup kitchen or rescue mission serving meals and collecting food.  Find a few and call around to see who can use the help and set up a time to go. Their need is ongoing; offer to help as often as you can.

Give.  There are a lot of nonprofits doing great work to fight hunger, and your donation gives them the ability to do more. It doesn’t take much to make a big impact. We have a short list of recommended hunger charities on the JustGive site, and here are a few examples of what your gift can do:

Let’s take action today and do something for the more than 43 million Americans who don’t have enough food to eat . . . so no one goes hungry.

I am reminded daily just how small our world can be. Most recently, an earthquake on the other side of the globe could have contaminated the fish I eat for dinner or the California coastal water I swim in. Japanese trading delays affected the lines of iPad impatience outside our local Apple stores—providing a front row seat to how connected our modern world is and how faraway disasters can have ripple effects that touch us in unexpected ways.

Seemingly back to back, a stream of disasters have headlined the US media: Haiti, The Gulf Coast oil spill, earthquake and nuclear contamination in Japan, tornadoes in the South – and now the horn of Africa drought.  The UN has declared famine in several regions of war-torn Somalia during the continent’s worst drought in more than 60 years. This is a dire prognosis, given the limited aid available/allowed by the current al-Shabab regime and the mass migration of people fleeing to neighboring countries for refuge that may not exist.

Not as many people have responded to the Somali famine as previous disasters or requests for aid. Perhaps we feel helpless, that our dollars don’t make a difference, or that we’ve donated to other causes and are already stretched thin. In the meantime, 3.2 million people, nearly half the population of Somalia, need immediate life saving assistance. To date, more than 29,000 children have already died and another 640,000 are malnourished.

While living abroad, I participated in the 40-Hour Famine with World Vision Australia, where I raised money by not eating for 40 hours. It was a real life feeling of what it would be like to live and function without sustenance – luckily one that ended after a mere 2 days.

Millions of people both domestically and abroad are not so fortunate.

I am immediately struck by the current crisis in Africa and consider it to be a GLOBAL concern and priority that children are dying of starvation in a world where there is and should be enough food for everyone. We all need to be involved, and take it personally.

HOW CAN YOU HELP?

In our ever-growing and connected “small world,” my actions – and yours –can make things better.

>> Wondering how much to give? JustGive helps you get started. Consider making your gift an automatic monthly donation (just click recurring).

>> Start a charity registry and do your own famine fundraising!

>> Keep the conversation going on Facebook and Twitter – inspire your friends to be part of the solution.