The senseless death of George Floyd while in police custody has left us shaken, angry and wondering how is it possible in our day that another black person in America could die in these circumstances. Hatred and racism have no place anywhere.

While we know about Floyd’s murder because it was videotaped, everyday, racism plays out in more ways than anyone can count. And we need to challenge it when and wherever we hear or see racism and prejudice.

Racism is like dust in the air.  It seems invisible—even if you’re choking on it—until you let the sun in.  Then you see it everywhere. As long as we keep shining the light, we have a chance of cleaning it wherever it lands.  But we have to stay vigilant, because it’s always still in the air.

Outrage set off weekend protests around the country in more than 30 cities. Those rallying cries were heard around the world, resulting in demonstrations in the United Kingdom, The Netherlands,  Germany, Iran, New Zealand and Canada too. Across many cities, thousands of protesters lay face down with their hands behind their backs for 9 minutes chanting “I can’t breathe.”

Our collective voices show strength and the inability to be divided by others. We must listen to each other, show compassion and empathy and never turn our backs on senseless brutality.

The last 3 months months in America have felt like a nightmare. First an unknown virus abruptly forced everyone into a “shelter in place” reality. The national economy tanked. Add to that the 40 million citizens who applied for unemployment benefits since March – one of every four American workers (weekly claims have just dropped to under 2 million but still look bleak). Food banks are overwhelmed. All of this has disproportionately affected people of color.

Then, we all saw the cold, cruel act of murder by Minneapolis Police officer Derek Chauvin. And we are reminded of the long list of other black lives lost that made the news in just the last few years, including Trayvon Martin whose murderer was acquitted and catalyzed the founding of Black Lives Matter.

We have witnessed this story repeat itself too many times and abhor the discrimination and institutional racism that has existed in this country for hundreds of years. As Governor Cuomo states, “these deaths are ongoing, like chapters in a book called Continuing Inequality and Injustice in America.”

Demonstrations that began peacefully have, in some cases, evolved into mayhem. Scenes of destruction have created chaos and concern with many cities enforcing curfews. Governors in 26 states called in the National Guard for help.

“So many things make America combustible right now: mass unemployment, a pandemic that’s brought health and economic inequalities, teenagers with little to do, police violence, right-wingers itching for a second civil war and a president eager to pour gasoline on every fire.”  New York Times, America is a Tinderbox

As we experience the fear and anxiety caused by activity on our city streets, we need to acknowledge that people of color have felt fear their entire lives—even when doing some of the simplest of things: driving, jogging, or going into a store. This racial tension is real—sometimes palpable, so often subtle—and omnipresent.

How to Create Real Change 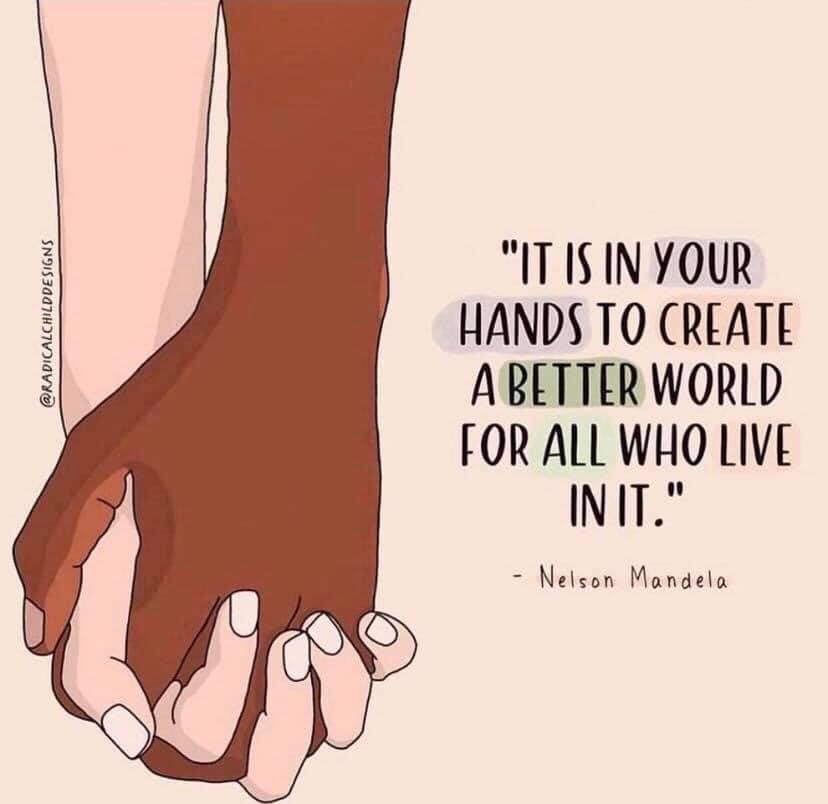 This week former President Obama tweeted out an article he wrote about our racial crisis, How to Make this Moment the Turning Point for Real Change   “[L]et’s not excuse violence, or rationalize it, or participate in it,” he wrote, “If we want our criminal justice system, and American society at large, to operate on a higher ethical code, then we have to model that code ourselves.”  He suggests if “we can channel our justifiable anger into peaceful, sustained, and effective action, then this moment can be a real turning point in our nation’s long journey to live up to our highest ideals.”

While it’s easy to say we need to do more, what does that mean for me and for you? What can we do? For those of us with white privilege (watch this video), that includes being aware of the words we use, making a commitment to do better, learning what we don’t know, and taking action. 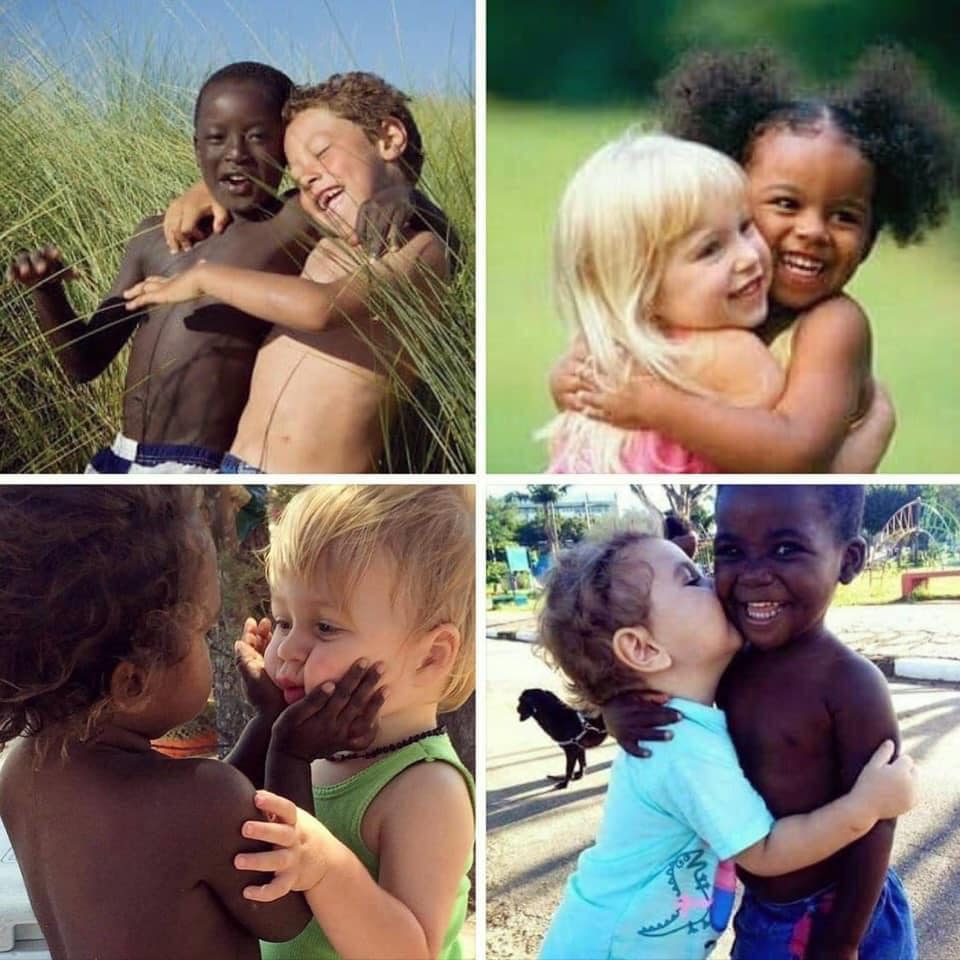 No one is born hating another person because of the color of his skin, or his background, or his religion. People must learn to hate, and if they can learn to hate, they can be taught to love, for love comes more naturally to the human heart than its opposite.

If you’re looking for more things you can do, here are 75 things white people can do for racial justice. (This article is continuously updated so you may want to bookmark it.)

Use your free speech and voting privileges

Most change in history has happened in response to protests and civil disobedience. But the demonstrations are not enough on their own, they must result in concrete policy from electing government officials who are responsive to these needs.

We know we need reform in our police departments and criminal justice systems. This social outrage shines a spotlight on how police officers are prosecuted and how the justice system does not address racial bias and inequality.

We can change the system. We have the power to decide who those elected officials are: vote! And stay vigilant to hold them accountable. Your vote can make a big difference in your communities, as you vote for local and state officials. It counts nationally too, in choosing the best leaders to guide our country. 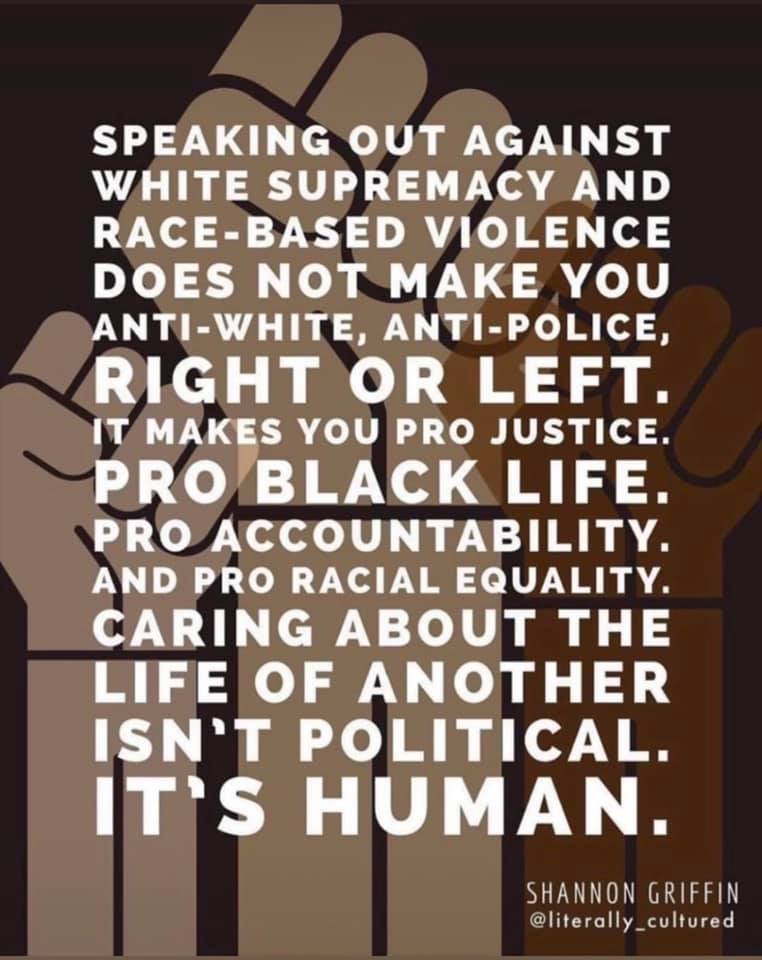 We need to continue peaceful expressions against injustice and demand accountability.  To have a unified voice that our leaders can hear.  To mobilize and put pressure on our leaders to revise laws. As Obama summarized, “If we want to bring about real change, then the choice isn’t between protests and politics. We have to do both.”

Bottom line, this is about humanity.

Let’s be brave enough to continue our discussion about race and justice.

All of us—for all of us.

Highlights of the Week: Unexpected Solidarity

Despite the violence that marred protests this week, there have been moments of solidarity as well—when police joined demonstrators in peace, bringing calm and unity of purpose.

Everyone wants justice. Here are some historic ways police are expressing that and showing solidarity with the protesters; by taking a knee and marching with protesters. 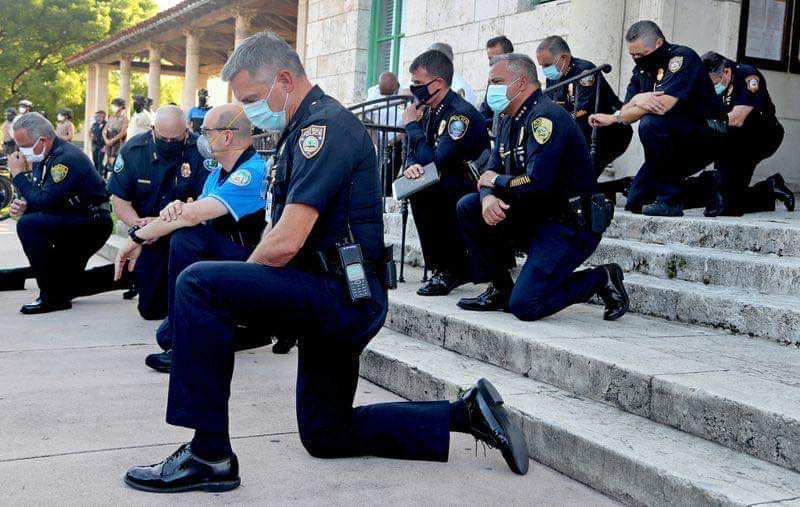 “We are with you, we’re not against you.”

“Watching the heightened activism of young people in recent weeks, of every race and every station, makes me hopeful. If, going forward, we can channel our justifiable anger into peaceful, sustained, and effective action, then this moment can be a real turning point in our nation’s long journey to live up to our highest ideals.  Let’s get to work.”  said former President Barack Obama.

Challenge of the Week

We all need to respond to inhumane, racist behavior. We must condemn the racial prejudice and profound injustice leading to this shocking loss of a black person’s life in our country.  It is time for us to open up our eyes and ears…and hearts. Start now!

Share your thoughts and ideas on our Facebook page and join the thousand of altruistic JustGive followers in creating real change.